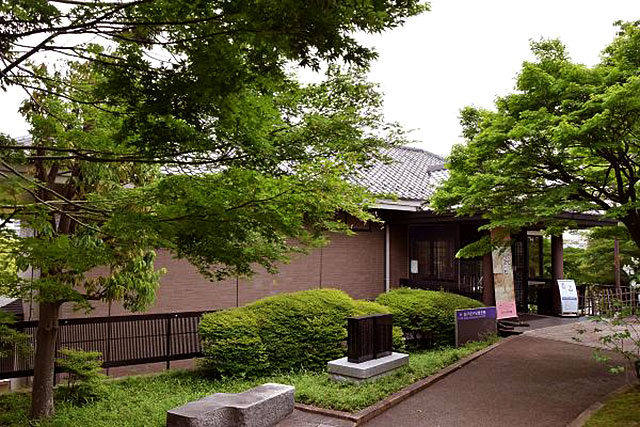 Materials related to the Paris Exposition to which Akitake was sent as representative of the shogun, old photos from the late shogunate period to the Meiji period, documents and artifacts that tell the story of Tojo-tei, and objects that had once been treasured by Yoshinobu until the latter's death are all exhibited in turn. The exhibits in this museum are replaced once every few months, so there are periods when the exhibition room may be closed.

Tojo-tei House was finished in April 1884 after a construction period of approximately two years. It is a wooden two-storey building in a pure Japanese style. Later, Tojo-tei House was extended. There are currently nine buildings connected by corridors with a total of twenty three rooms. While Tojo-tei House is basically in the style of a feudal lord mansion, its scale is significantly smaller and it is possible to see from the floor plan that life here was very different. Although the buildings have been made with abundant use of the best cedar wood, the ornamental features are quietly elegant so as to complement the minimal space. If you go past the pine forest in the southwest direction, there is one more garden that incorporates an arbor.

Akitake Tokugawa poured his heart and soul into the surrounding garden so he could sit and enjoy the lovely view from the parlor. In this Meiji-era garden, the lawn, grown using Western techniques, is surrounded from the direct south to the east by a row of Japanese umbrella - pine and on the northwest by a stand of Chinese parasol tree, while there is another garden with an arbor over the pines to the southwest.

This is the oldest remaining lawn grown using Western techniques in Japan, and the method of using stands of trees as the principal landscaping is not seen anywhere else. Another highlight is the view of the Edogawa River and Mt. Fuji that can be viewed in a westerly direction from Tojo-tei House. The Old Akitake Tokugawa Garden (Tojo-tei Garden) website has more details on the garden. Tojo-tei House: a nationally designated Important Cultural Property Old Akitake Tokugawa Garden: a nationally designated Site of Scenic Beauty

Akitake Tokugawa(1853 to 1910), a younger brother of the last ruler (shogun) of the House of Tokugawa (Yoshinobu Tokugawa, 1837 to 1913), finished building Tojo-tei House in April 1884 and completed work on the garden at the end of 1890. An area of approximately one third the size of the site that once exceeded 70,000m2 has since been turned into a historical park. Within this park you will find the Tojo Museum of History and the Shountei Pavilion, where traditional Japanese tea ceremonies are held.

There are large Japanese umbrella pine and sawara cypress trees at an elevation of about 25m that look out over the Edogawa River and Mt. Fuji on the west side. You can also enjoy seasonal flowers, such as ume (Japanese apricots), deep red weeping cherry trees and potted wisteria. The singing of the birds can be heard throughout this green park.