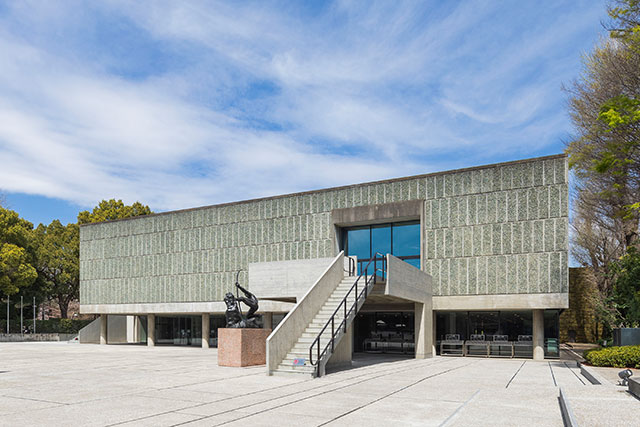 The National Museum of Western Art, Tokyo was established in April 1959 and was based on the Matsukata Collection focusing on the Impressionist paintings and Auguste Rodin's sculptures previously stored by the French government. The museum's purpose is to provide the public with opportunities to appreciate western art. Since its opening, the museum, as Japan's only national institution devoted to western art, has been involved in exhibitions, art work and document acquisition, research, restoration and conservation, education and the publication of materials related to western art.
The museum exhibits works from the Matsukata Collection as well as works created from the Renaissance to the early 20th century that have been acquired since the museum's opening. The museum has purchased art work every year since its establishment in its efforts to build and develop its permanent collection. These permanent collection works are displayed in the Main Building (Le Corbusier, 1959) and New Wing (MAEKAWA Kunio, 1979) throughout the year.
The museum also collaborates with media companies and others to present about three special exhibitions a year featuring loan works from overseas museums and collections. Special exhibitions are displayed in the Exhibition Galleries completed in 1997.
In April 2001, the National Museum of Western Art and three other national museums were merged to the umbrella organization known as Independent Administrative Institution National Museum of Art, which consisted of six museums as of 2018.
In 2016, “The Architectural Work of Le Corbusier, an Outstanding Contribution to the Modern Movement” including the National Museum of Western Art was inscribed on the UNESCO World Heritage List.
During the museum's 18-month closure period from October 19, 2020 to April 8, 2022, the forecourt, designed by the French architect Le Corbusier, underwent renovation.
The "19th Century Hall," a large atrium in the center of the museum's main building designed by Le Corbusier and the starting point for the museum's permanent exhibitions, will be open to the public for the time being (visitors will still need a ticket to access the area beyond the ramp leading to the second-floor exhibition rooms).