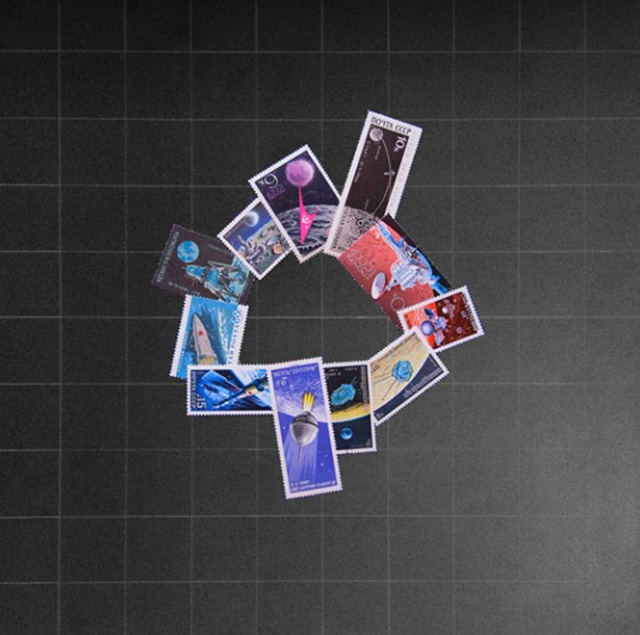 In my work, I use communicative language that I express through different media. I often combine elements of high culture with elements of popular culture through the archive mode or by interfering with contemporary society. My works deal with themes such as clash, ruin, repetition, the history of the twentieth century and possible futures – with a particular focus on the European and Mediterranean contexts. The subjects are mainly monuments, collective identity and the anthropised landscape. I often use pre-existing materials such as postcards, stamps and banknotes, but also digital material, newspaper articles or any other type of subject that I reprocess to better understand our times.

For the exhibition, I would like to present a body of works made with different media, some in real form and some exhibited digitally. The main work from which the exhibition takes its name is Air From Another Planet (2015), a series of small-format collages made with commemorative stamps of space missions of countries aligned with the former Soviet bloc. In opposition/dialogue are three elements of the series 30x30x30 (2015), realized with postcards and referring to the Obelisk monument. A theme adopted from the culture of the ancient Egyptians and spread throughout the world over the centuries. In the video Memento Park (2019), the relationship between communist utopia and globalization is united and documented through a series of performative interventions. Then follow some works in digital form that relate to my personal experiences in Japan: the two series of works “Kagura” (2014) and “Amaterasu Goddess of Sun and Holy Mary of Civitavecchia” (2013/2015), as well as an ongoing project “Open Letter to the Mayor” (2021-) create an imaginary bridge between Italy and Japan. Among them, the video Sail (2012), the co-publication work Ruin or Revolution (2020) and some elements of the project Archaeology of the Future (2021 – ongoing) will be also presented to the public.

*Realized with the support of the Austrian Cultural Forum Tokyo.
https://www.austrocult.jp/

monade contemporary is excited to present “Air From Another Planet” by artist Ryts Monet.

Ryts Monet has been working on the imaginary landscape of stagnant industrial cities, ruined monuments in the former communist countries, archaeological sites, and international banknotes in Mediterranean countries, exploring the history, national systems, and ideologies of people living in the globally expanding information capitalism through everyday materials such as newspapers, postcards, and money. He has also intermittently developed works based on his interest in contemporary Japanese culture, traditions, and folklore. In the face of the current political and economic system that seems to be expanding, inflating, and heading toward self-destruction at an accelerated pace due to information technology, the time spirit and imaginary landscapes represented by Ryts Monet’s works seem to emerge as monuments of people’s struggle for freedom and survival or their flight from it.

Centered on the title series “Air From Another Planet” (2015), which evokes a futuristic but nostalgic vision over the cosmic universe, how can the motifs of works such as obelisks from around the world, monumental statues from communist-era Hungary, and the longing for religious symbols in Kagura, Amaterasu, and the Virgin, and the call to the mayor to bring a new connection between the cities of Japan and Italy, create utopian solidarity or an alternative terrain among people? How can the relationship between people, the city-state, and nature then be objectified, recorded, and made public? Reflecting on Ryts Monet’s early and recent activities, please participate in the movement of history over the struggle/flight for survival and freedom of the people to come.

Ryts Monet
Bari, 1982, lives and works in Vienna. He studied at the University IUAV of Venice, where he graduated in the BA Visual Arts in 2007 and in 2011 he specialized in Visual Communication (MA Program). In 2022 Ryts Monet became a regular member of the Vienna Secession. Since 2016 he has been represented by the Michela Rizzo Gallery in Venice.
https://rytsmonet.eu/