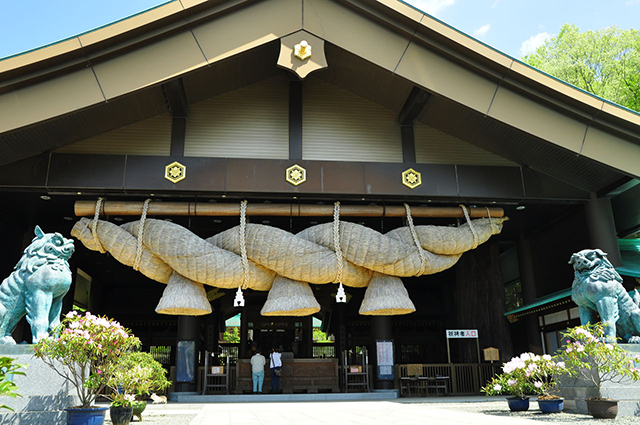 Our shinto shrine (Hitachi Province Izumo Taisha) was erected in 1992 with a branch from Izumo Taisha in Shimane Prefecture. The main deity is Okuninushi no Mikoto. We believe that the shrine has been a place of worship to the gods since ancient times, as well as a place where the most advanced culture and arts were born, and we aim to create a new form of shrine as an integrated space that connects the past, present, and future. One of our initiatives, "Discover and be inspired at the shrine! and Project" is planned, managed and sold by Gallery Oberlin.
An exhibition will be held in the gallery space, exhibiting and selling contemporary artworks by both famous and up-and-coming Japanese artists. Other projects include the production of an art red seal book, the exhibition of art BOXes in the worship hall, the exhibition of artworks at Senun-tei, a tree funeral cemetery, and the creation of signboards to improve the landscape of the grounds of the temple.
In addition, last year, a residency program by a contemporary artist titled "Moku Moku Fu: The Forest of Hitachi no Kuni no Mori no Nakamatachi Itoh Tohei x Hitachi Kuni Izumo Taisha Special Public Production" was held at the Rinsaikan rice warehouse on the grounds of the shrine.
The new shrine office will be constructed as part of the thirtieth anniversary of the shrine's enshrinement, and when it is completed, we plan to exhibit the works from our collection as part of the "Hitachi Province Izumo Taisha Collection" on a permanent basis. These activities are attracting a great deal of attention as a space that connects Shinto and art and provides visitors with an embodiment of Shinto and art. We hope that these activities will further contribute to the revitalization of the region and the promotion of culture and art.