Outline
The Kawamura Memorial DIC Museum of Art is a facility opened for the purpose of sharing the works of art collected by DIC Corporation and its affiliated companies with the public.
In order to house the Museum’s diverse collection centered on 20th-century art, the architecture was designed with spaces well suited to the nature of the works, while also blending beautifully into the lush natural environment where visitors can enjoy the beauties of the four seasons. As such, the Museum was opened in 1990 on grounds adjacent to the DIC Central Research Laboratory in Sakura City, Chiba prefecture, to stand as a harmonious union of these three elements, the art works, the architecture and the natural environment. 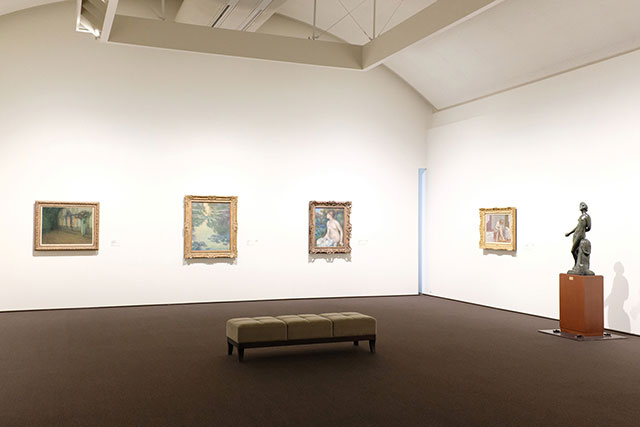 Birth of the Collection
As the second president of Dainippon Ink and Chemicals, Incorporated (former name of DIC Corporation), Katsumi Kawamura (1905-1999) took the reins of the company in the Showa Period after World War II. While devoting his energies to the challenges of managing the company, he is also known to have greatly valued his time spent alone communing with works of art in his spare time. Eventually, driven by the desire to share this joy with others, he conceived the idea of creating a museum, and toward that aim he began collecting artworks in earnest from the beginning of the 1970s.
Assisted by advice from the sculptor Yoshikuni Iida and others, Katsumi Kawamura focused his collecting on contemporary works of artists who had still not been widely introduced to the Japanese audience, and at an early stage he purchased works of American contemporary artists, who were also beginning to gain recognition in Europe at the time. In this way, he created a collection of 20th-century art that the Japanese audience had few opportunities to view together in one venue.

Architecture
For the architectural design of his museum, Katsumi Kawamura turned to his close friend and representative figure in the modernist movement in Japanese architecture, Ichiro Ebihara. Although the first impression may be the exterior design centered around a twin tower motif, top priority in the architectural design was placed on the balance of the interior spaces, with a focus on the finest details to make the gallery spaces well suited to the artistic orientation and size of the works in the collection and lighting plans aimed at enabling a pleasant and stress-free viewing experience for museum visitors.
In 2008, as part of commemorative programs for DIC Corporation’s 100th anniversary, the museum facilities were expanded to include a Rothko Room and new exhibition gallery space that provides better environments for the display of artworks.

Programs
Despite having been initially founded solely for the purpose of preserving, researching and showing the Museum’s artworks to the public as a permanent collection, soon after the Museum’s opening we responded to visitor requests by adopting a new policy of holding special exhibitions several times a year and providing daily guided tours of the works on display at any given time, and this basic policy remains the same to this day.
In addition, our programs today include a “Supporters” of the Museum membership organization for art lovers and our outreach Art Education Support program, which accommodates group field trips to the Museum to view the art in an interactive discussion-type atmosphere. Meanwhile, we also provide the Annex Gallery space for displays of artworks by children and students, as well as concerts and other events, all open to the local communities.

The Grounds and Environmental Preservation
One of our Museum’s great assets is its roughly 10 hectares of grounds that retain the contours area’s natural rural topography. The Museum’s grounds have been cultivated with a concern for maintaining primarily a variety of indigenous plants of the area to create a lush natural landscape, around which outdoor sculptures were positioned at fitting locations.
Long before the Museum was constructed, efforts were made to preserve the naturally existing trees and fauna that thrived on the landscape while cultivating flora that would be a pleasure to walk through in each of the four seasons, in order to maintain an environment where nature and people could coexist in harmony.
(From the Museum's official website)