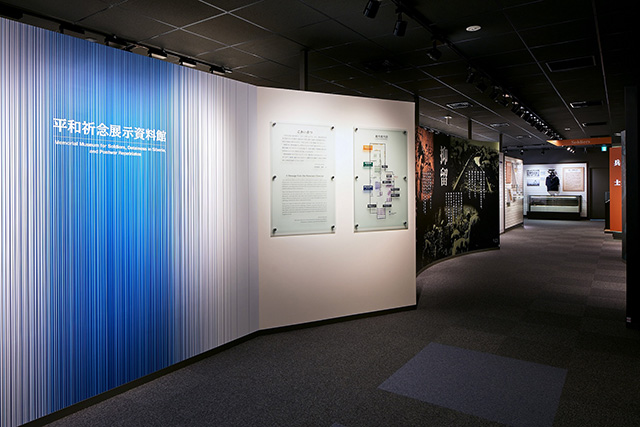 Memorial Museum for Soldiers, Detainees in Siberia, and Postwar Repatriates exhibits a variety of actual materials, graphics, videos, and dioramas that tell the stories of the labor and hardships of soldiers, postwar forced internees, and repatriates from overseas during the last World War in an easy-to-understand manner for generations who have not experienced war.
The museum also holds exhibitions and other outreach activities throughout the country in order to effectively use the materials and pass on the stories of the hardships in an effective manner.

The Three Labors
The Museum is a facility that deals with the three types of hardships experienced by soldiers, those who were forcibly interned after the war, and those who were repatriated from overseas, even after the war ended.
Soldiers
These are people who left their families to go to dangerous war zones, risked their lives, and experienced great hardships for their country during the previous war. Some of them are disqualified from receiving pensions and benefits due to their short military service.
Post-war forced internees
These are people who, despite the end of the war, were forced to engage in harsh forced labor in Siberia and other cold regions of the former Soviet Union and Mongolia under poor living conditions and scarce food.
Repatriates from overseas
These are people who lost their livelihoods in foreign countries due to defeat in the war and returned to their homelands after passing through harsh conditions that put their lives in danger.